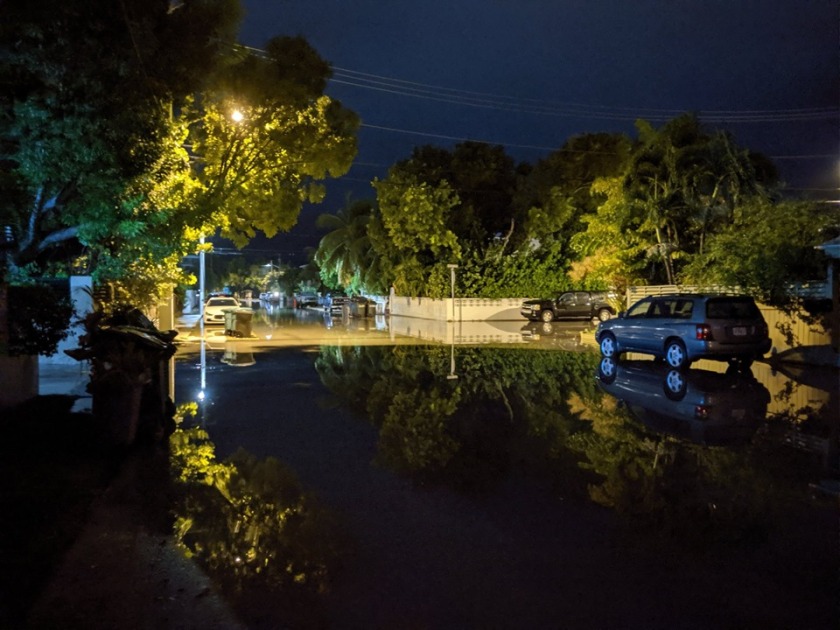 The Florida panhandle and North Florida can’t seem to get a break from the summer heat. While the East-Central Coast has been enjoying breezy weather and more or less average temperatures, you’d think it was the Fourth of July in the panhandle.

People are grumbling about it on Facebook because well, this is October and enough is enough.

“Please make it stop!” one area resident wrote on the NWS-Tallahassee’s Facebook page. “Heat delirium has set in,” another said.

The high hit 100 degrees in Crestview on Tuesday — that’s air temperature, not the heat index. It was 97 in Marianna, 95 in Tallahassee, and 96 in Pensacola.

Farther down the peninsula, it was mostly in the low 90s on the West Coast.

The forecast for Tallahassee is for a temperature increase — Friday’s forecast high is 97.

Tallahassee had its first measurable rainfall on Tuesday since August 27. But it was no occasion to celebrate, since just 0.01 of an inch fell, about enough to smear the dust on your windshield.

The much-advertised cold front sweeping across the South is forecast to bring some relief in the early to middle part of next week. Until then, the National Weather Service says: “Daily high temperature records will be in jeopardy each day through Saturday across portions of the region as highs will rise into the mid to upper 90s.”

All-time records for the month of October may also fall.

The GFS temperature forecast shows some low- to mid-60s for overnight lows around the middle of next week, with lows dipping into the high 50s the week after.

Some Florida East Coast cities have been setting record warm lows, meanwhile. Tuesday’s low in Daytona Beach was a balmy 79, which busted an 86-year-old record of 78, set in 1933.

TROPICS WATCH: Hurricane Lorenzo didn’t make a direct hit on the Azores, but it brought wind gusts of up to 90 mph to western islands in the chain. It caused downed trees and power outages, but no injuries were reported by European news agencies.

Ireland is likely to be next to feel the effects of Lorenzo, which at its peak was a Category 5 storm. It was forecast to become post-tropical by Thursday, but it will still be packing hurricane-force winds through Friday, the National Hurricane Center said.

Forecasters were continuing to track a disturbance in the Caribbean, giving it a 20 percent chance of tropical development over the next five days as it moves west-northwest. The next name on the list is Melissa. 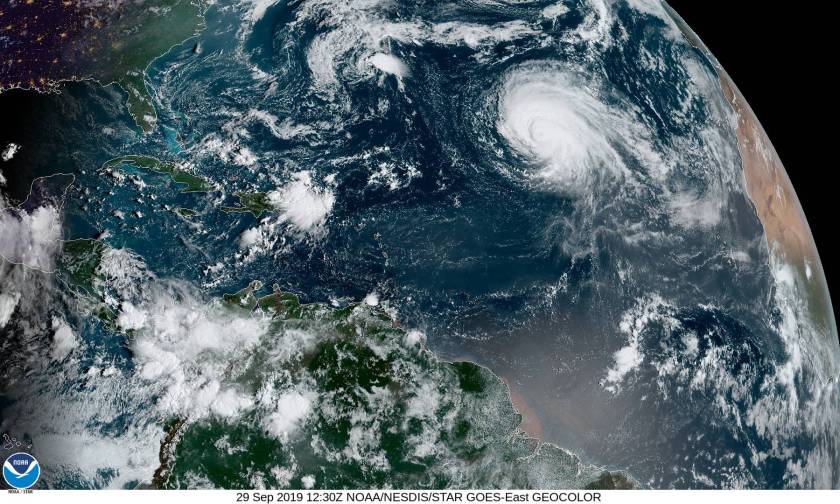 MONSTER IN THE MID-ATLANTIC: Hurricane Lorenzo (upper right) became the season’s second Category 5 hurricane Saturday night with winds of 160 mph. It had weakened slightly to 155 mph on Sunday morning. It was forecast to swipe the Azores on Tuesday night and Wednesday. (Image credit: NOAA)

DORIAN FLORIDA IMPACT UPDATE: The Kennedy Space Center had a wind gust of 74 mph from Hurricane Dorian — which was hurricane-force — at 2 a.m. on September 4, according to new reports from the National Weather Service in Melbourne.

The reports were updated by the National Weather Service in Melbourne on Wednesday.

DRIED OUT: Through Saturday, Fort Lauderdale had a September rainfall deficit of 6.78 inches. Just 1.3 inches have fallen all month.

But the pattern over the Florida peninsula is about to change, the National Weather Service says. Rain chances jump to around 50 percent in some areas by mid-week as more moisture — including the remnants of dissipated Tropical Storm Karen — arrive from the east, according to forecasters.

RECORD WATCH: Melbourne reported a record warm low on Saturday of 80 degrees. That beat the old record of 79, set way back in 1941

PANHANDLE COOKING: “Raise your hand if you are officially done with this heat,” the National Weather Service in Tallahassee said Saturday, as record temps continued. “Another hot day, and mostly dry, in the forecast again.” Tallahassee tied a record high Friday with 96, matching the mark originally set in 1972. And Apalachicola hit 92, tying a record set in 2011. (Image credit: NWS-Tallahassee) 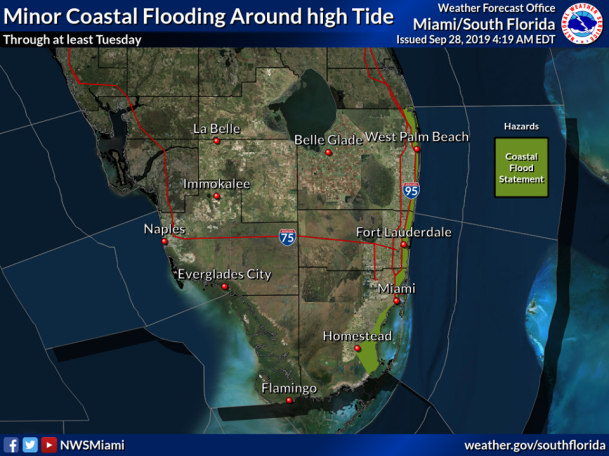 Minor flooding is expected on Florida’s East Coast through early next week due to seasonal high tides. Rain is still in the forecast for mid-week — 30-40 percent in Central Florida and South Florida; and up to 50 percent in the Keys.

The National Weather Service in Miami says the remnants of Karen will “move this way by mid-week,” but an upper-level low also in the area should prevent any redevelopment of the system.

NOAA’s Weather Prediction Center indicates that the heaviest precipitation will be southeast of the Florida peninsula.

TROPICS WATCH: Hurricane Lorenzo was all alone on the National Hurricane Center’s Tropical weather map on Saturday. No other disturbances were being tracked for potential development.

Lorenzo has been a major hurricane (Category 3 or stronger) for two days — a new record for most major hurricane days east of 45 degrees, according to Colorado State University hurricane researcher Philip Klotzbach.

“This breaks the old Atlantic record set by Hurricane Carrie of 1.75 days set in 1957,” he said on Twitter Saturday.

The GFS is still hinting at possible development in the western Caribbean over the 10-14 day period.

An end may be in sight for the ultra-dry weather pattern that has kept the Florida peninsula in its grip for most of September.

Karen was still clinging to tropical storm status on Friday morning, and was forecast to become a remnant low on Saturday and dissipate in the open Atlantic early next week.

However, the National Weather Service in Miami said the remnants of Karen could bring some needed rain to the area by the middle of next week.

An upper level low “should bring enough shear to the area to keep the remnants of Karen from redeveloping in the area, and keep the moisture passage as just an area of increased rainfall for the mid and later half of the week,” forecasters said Friday.

“It is this tropical wave that finally brings a decent chance of rain back to South Florida for Wednesday into Thursday.” They added that “there is still uncertainty this far out.”

The GFS forecast model shows rain picking up on Wednesday and Thursday, with perhaps another batch of precipitation the following week. And in fact, the Climate Prediction Center’s forecast for October 4-10 is indicating above normal rainfall for the entire Florida peninsula.

East-Central Florida rain chances increase to 50 percent by the middle of next week, which National Weather Service forecasters in Melbourne are attributing to an upper level low approaching from the southeast.

Rain chances for West-Central Florida improve into the 30-40 percent range.

TROPICS WATCH: Hurricane Lorenzo was still a powerful Category 4 storm with winds of 145 mph, moving north in the Central Atlantic. It could brush the Azores by the middle of next week.

Nothing else was showing up on Friday model runs, at least in the next seven to 10 days. The GFS had something brewing in the western Caribbean at the end of its run, but that’s two weeks away.

RECORD WATCH: Jacksonville set a record high for the third day in a row with 97, breaking the previous record of 96 set in 1961. Gainesville’s high of 95 broke the record for the date of 94 set in 1980.

And in the panhandle, Apalachicola set a new record high with 95, beating the previous record of 92 set in 1988. 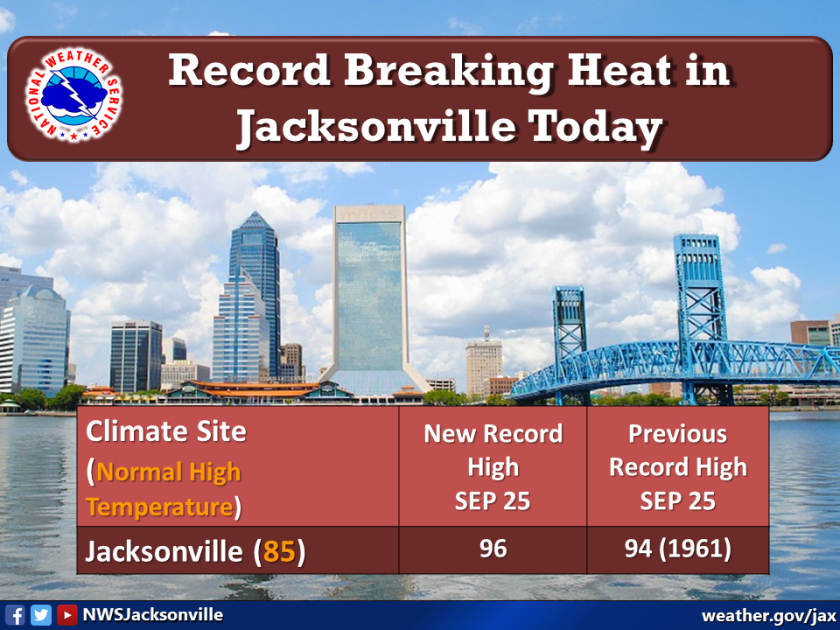 Elsewhere in the Florida panhandle, the high was 99 degrees in Crestview and Marianna.

It wasn’t picnic weather down the coast into West-Central Florida, either. Tampa made it to 94 — the 22nd day this month with highs in the 90s.

Once again, if you were in a coastal community on the Atlantic side, it felt more like fall — the high was 83 in Jupiter, Palm Beach County, and 84 on the University of Miami campus.

RAINFALL REPORT: The entire tier of North Florida counties, and most of the panhandle, are now dealing with Moderate Drought conditions, the U.S. Drought Monitor reported Thursday. And a sliver of the panhandle in Holmes and Walton counties, are in Severe Drought.

Abnormally Dry conditions, the precursor to drought, stretched down into the Nature Coast on the west side of the peninsula over to around St. Augustine.

I was comparing some of the rainfall totals around the state through Wednesday with historical records. There are still five days to go in the month, but some areas of Florida could end up with the driest September in at least 30 years.

Fort Lauderdale, for example, has a September rainfall deficit of almost 6 inches. 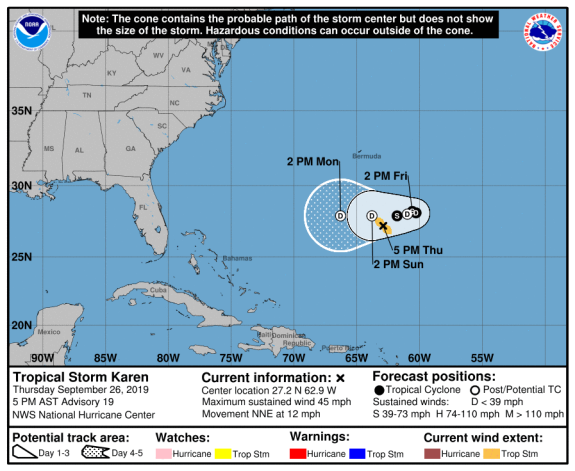 Forecasters at the National Hurricane Center were still predicting a westward turn for Karen, but it was expected to be a remnant low by Saturday. (Image credit: NHC)

TROPICS WATCH: There were no potential disturbances being tracked by the National Hurricane Center Thursday — no colored “X’s” on the Tropical Weather Outlook map for a change.

Hurricane Lorenzo became a major hurricane with 125 mph winds, although it’s not expected to affect land. And Tropical Storm Karen was barely hanging on and expected to dissipate into a remnant low by Monday. 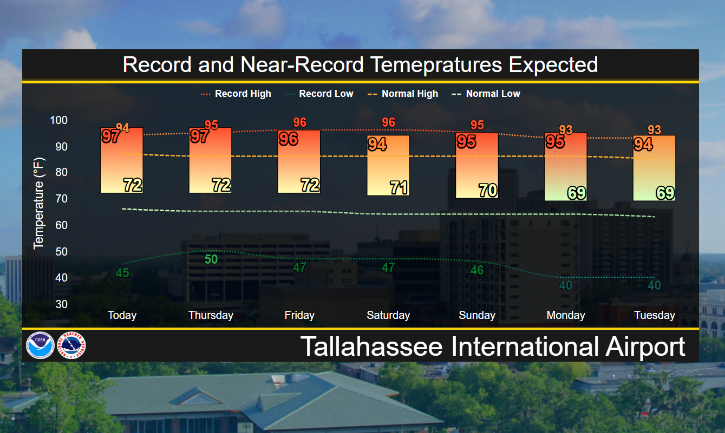 Florida temperatures have flip-flopped this week with record highs in the north and record lows in Central Florida, along with generally pleasant conditions in the South.

“Where is fall?” National Weather Service forecasters in Tallahassee asked on their website Wednesday. “Unfortunately, no relief from summer is on the horizon with record to near-record temperatures in the forecast for the next 7 days. Wish we brought better news for y’all. Stay hydrated and stay cool!”

Even long-term, dry conditions and record heat are in the forecast thanks to strong high pressure.

On the other hand, Vero Beach tied a record low Tuesday with 67, matching the record set in 1968.

The East-Central Coast and Southeast Coast are getting the benefit of cooler air off the Atlantic, with east to northeast winds.

One problem shared by the entire state, from Tallahassee to Key West, is a growing September rainfall deficit.

Fort Lauderdale stands out at the top of the pack with a mammoth precipitation shortfall of 5.71 inches. while West Palm Beach is 5.45 inches in the hole and Naples comes up 5.20 inches short. Miami has a deficit of 4.70 inches.

These shortages aren’t unique around the state. Marathon in the Keys is down 4.01 inches and Key West is 2.96 inches short.

Dry weather, unfortunately, is in the forecast through the first week of October, according to NOAA’s Climate Prediction Center. Above normal precip is in the longer range forecast for the middle of October, but it remains to be seen whether that will pan out. 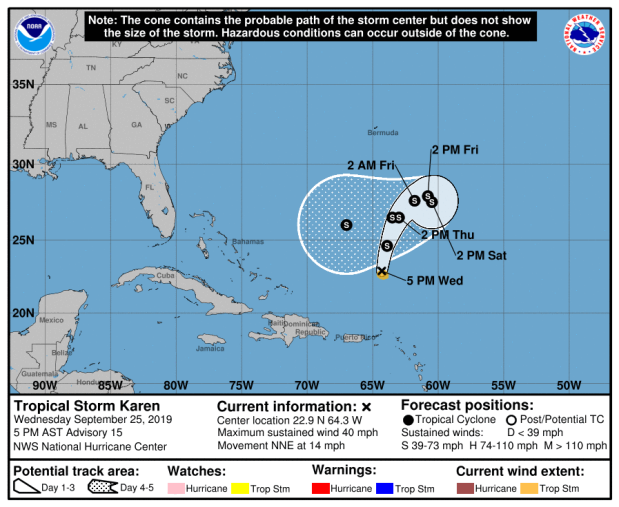 UPDATE: Tropical Storm Karen was downgraded to 40 mph at 5 p.m. — barely tropical storm strength — and forecasters said there may not be much future strengthening. “The NHC intensity forecast has been lowered considerably from this morning’s forecast,” NHC forecaster Robbie Berg said. “It still allows for the possibility of some strengthening, but if model trends continue, the official forecast could be lowered further in subsequent advisories. And if the global models are correct, Karen could even lose deep convection, and hence become post-tropical, in about 3 days.” (Image credit: NHC)

ORIGINAL TROPICS WATCH: Tropical Storm Karen caused mudslides and major power outages in the U.S. Virgin Islands Tuesday, along with record rainfall. The storm was north of the islands in the Atlantic on Wednesday, it’s future uncertain.

Forecasters still believe Karen will get as far north as 27.3 degrees on Thursday before making a left turn toward the west and south. By Monday, the storm, which is expected to be packing 65 mph winds, is forecast to be at 25.9N 67.9W, continuing to move toward the Bahamas. The change in direction is due to a ridge of high pressure to the north of the storm.

The National Hurricane Center has not speculated on how close Karen may come to the Bahamas and Florida, and many of the forecast models show it fizzling out, or turning back to the north-northeast next week.

The NHC should be able to offer more clarity over the next couple of days.

In the eastern Atlantic, meanwhile, Lorenzo became the season’s fifth hurricane with winds of 80 mph. It was forecast to become a major hurricane while turning toward the north and then northeast in the Central Atlantic.