With strong easterly winds and a cold front stalled out over the Keys, some decent rainfall totals were occurring over southeastern Florida and the Keys. A CoCoRaHS observer for the national precipitation network reported 1.54 inches in Key Largo from Saturday through early Sunday morning.

Palm Beach County reported around a quarter of an inch. Lighter amounts fell along the Treasure Coast.

Another nice warm-up is scheduled for the coming work week, but then a cold front knocks temperatures back to below normal next weekend, just in time for the start of the exhibition baseball season.

The Climate Prediction Center is calling for February to go out on a slightly cooler note, especially the southern tier of states from New Mexico all the way to the Carolinas and the Mid-Atlantic States on the East Coast. 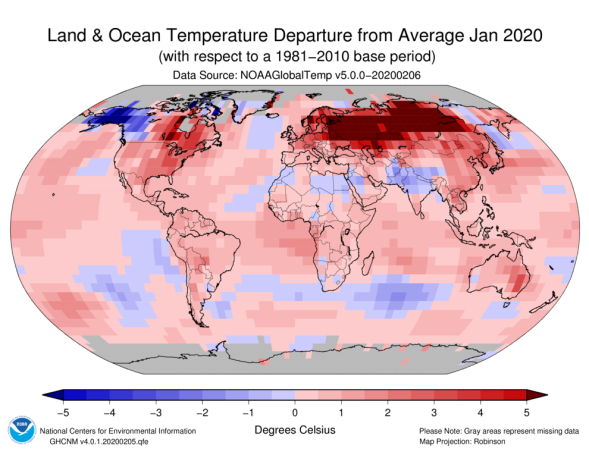 ANOTHER JANUARY, ANOTHER RECORD: Earth had its warmest January in the 141-year-old record, the National Center for Environmental Information (NCEI) said on Thursday.

Temperatures worldwide were 2.05 degrees Fahrenheit above the 20th century average, which beat the previous record for the warmest January by 0.04 of a degree. That occurred in January 2016.

Every state in the Lower 48 had above normal temperatures, including Florida, which was above average but not record warm. Highest temperature anomalies were found in Texas and Oklahoma, the Great Lakes States, and the Northeast.

The Caribbean had its second warmest January, also behind 2016.

So I figured it was a good time to take a peek at sea surface temperatures in the Caribbean and the Main Development Region of the tropical Atlantic. It’s early, of course, but very warm water temperatures seem to be setting up shop from the coast of Africa all the way west into the Caribbean and Gulf of Mexico.

Particularly high temperature anomalies are in place off the U.S. East Coast, with the highest being in the Mid-Atlantic.

Today was rumored to be the end of the world as we know it. But it turned out to be no biggie after a space rock called 2002 PZ39 sped past Earth at a (relatively) safe distance of 3.6 million miles at 6:05 a.m.

The non-event had been built up on social media as a potential planet killer, since the asteroid is 3,250 feet long, larger than the tallest skyscraper in the world.

One media outlet said that “the energy from its explosion would be enough to trigger a global nuclear winter that could last for years. The harsh environmental changes triggered by the asteroid’s impact could lead to the mass extinction of different species.”

But on Spaceweather.com, science writer Tony Phillips said: “There was never any danger. NASA has been tracking the 0.5 km asteroid for 17 years and long ago determined that a collision would not happen.”

Phillips posted a video taken via telescope of 2002 PZ39 sailing across the early morning sky. In celestial terms, 3.6 million miles is a close encounter, but it’s 15 times the distance to the moon.

CLEARLY, NOT A GOOD MORNING COMMUTE: Dense fog covered the Everglades, and parts of the West Coast up into Central Florida, on Friday morning. A Dense Fog Advisory was in place through 9 a.m. This image was from a Florida Department of Transportation camera on I-75 in the Everglades at 7:30 a.m. (Image credit: FDOT/ NWS-Miami)
Lots of temperature records were set or tied around the Florida peninsula on Thursday — the last full day before a cold front was poised to knock temps back a bit closer to normal for this time of the year.

In South Florida, the record warm minimum in West Palm Beach was 77. It was the kind of sultry night you normally don’t see until July. This beat the old record by a remarkable 4 degrees — and that record low of 73 was just set two years ago in 2018.

Palmdale, in Glades County, reached 90; as did Weston and Plantation, in Broward County.

EYES ON THE PACIFIC: In an update that will surely influence early hurricane season forecasts, NOAA’s Climate Prediction Center on Thursday said ENSO Neutral conditions are favored in the tropical Pacific through spring and into summer. That means water temperatures near normal.

During El Niño — warmer than average Pacific temps — hurricane/ tropical storm formation is undercut by strong wind shear in the Atlantic. During La Niña — cooler than normal temperatures — wind shear eases up in the Atlantic and a busy hurricane season generally ensues.

Hurricane experts, like Colorado State University’s Philip Klotzbach, say that during neutral conditions other factors in the Atlantic become more important. These include water temperatures, the amount of dry air and atmospheric pressure and the presence — or lack of presence — of Saharan dust.

Note that neutral conditions were in place for the peak of the hurricane season last year, and September hurricane activity was robust.

CSU will issue its first hurricane season forecast on April 2. 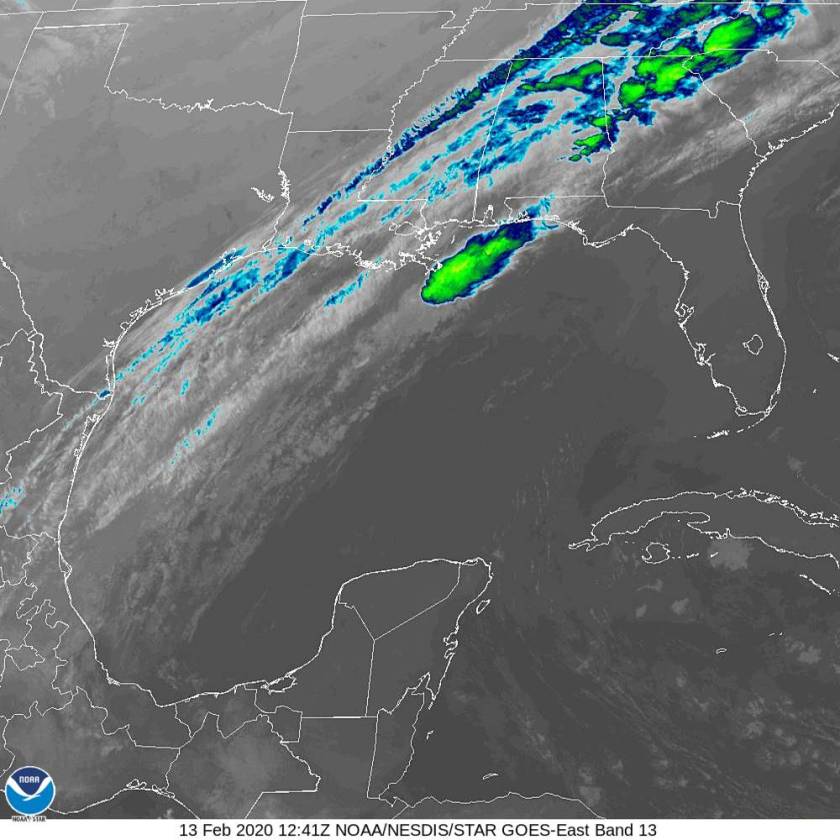 NEXT WEATHER MAKER: The cold front entering the panhandle Thursday was on its way to the Keys, where it was expected to wash out over the weekend. Temperatures will edge down slightly over the weekend before rebounding again next week, according to the National Weather Service. (Image credit: NOAA)

That Mickey Mouse suit is starting to get a little uncomfortable. Orlando tied an 81-year-old record high Wednesday with a sultry 88 degrees, matching the mark originally set way back in 1939.

Record highs were also set in Sanford with 87, beating the old record of 86 set in 2018; Leesburg with 86 (tied with 2013); and Jacksonville (high of 84 matched the record set just one year ago). Naples tied a record high for the second day in a row with 89.

National Weather Service forecasters said earlier this week they wouldn’t be surprised to see a few 90-degree temps around South Florida, and that’s what happened Wednesday, with a few popping up out in the Everglades.

A cold front that was just entering the Florida panhandle today was forecast to roll down the peninsula on Friday, bringing scattered rain showers as it heads to the Keys, where forecasters expect it to stall out.

On a scale of 1-10, 10 being a lallapalooza that brings heavy rain and thunderstorms, followed by a shot of frigid air, this front should rank at about a minus-1. The National Weather Service is calling for less than a quarter of an inch in Central Florida and perhaps up to a third of an inch at the southern tip of the peninsula as the front stalls just to the south.

Then, after a Saturday with close to normal temperatures, another warm-up begins with more highs in the 80 forecast for next week.

A shot of more wintry air is still suggested by forecast models for the last weekend of the month.

DROUGHT UPDATE: Areas of West-Central Florida affected by Abnormally Dry conditions shrank slightly in the latest analysis of drought conditions in Florida by the U.S. Drought Monitor. Sarasota County returned to normal status and the designation was removed from parts of Manatee, Hillsborough and Hardee counties.

However, Abnormally Dry conditions spread in North Florida, crossing the state from around Citrus County on the Gulf to Flagler County on the Atlantic. A small swath of the Central Panhandle remained under Moderate Drought.

The late winter mini heat wave is on. Temperature records fell from Jacksonville down to Naples on Tuesday as high pressure maintained its grip on the peninsula.

In fact: “The well above normal temperatures is the main story the next few days,” the National Weather Service in Miami said in its Wednesday morning discussion.

“High temperatures the next few days will be in the mid 80s for portions of the east coast to mid to upper 80s for the interior and Gulf coast, and would not be surprised if isolated
areas of interior reach 90 degrees.”

Several record high temperatures were set. Jacksonville checked in with a high of 85, beating the old record of 84 set 81 years ago in 1939. In the panhandle, Apalachicola tied a record high with 75. That matched the record set 88 years ago in 1932.

A cold front rolls down the peninsula this weekend, but with northeasterly winds behind the front, there won’t be much cool air, forecasters said.

The Deep South is getting hammered once again with flooding rains, but high pressure over most of the Florida peninsula is keeping us high and dry.

A swath of the South from northern Louisiana east through the Atlanta area and into the Carolinas is under a Flood Watch, with “near-record midwinter moisture” streaming up from the Caribbean and Gulf of Mexico, according to Bob Henson at Weather Underground.

Atlanta was under a Flash Flood Watch through 7 p.m. Tuesday as “moderate to heavy rain” soaks North Georgia, the National Weather Service said. “With saturated soils and very high stream flows already in place across the region, runoff from the additional rain will be enhanced, leading to a greater threat of flash flooding,” forecasters said.

Atlanta picked up 0.88 of an inch Monday, but Cartersville, Georiga, northwest of Atlanta, measured 1.75 inches.

High pressure over the Florida peninsula is keeping all of that nasty weather far to the north. Chamber of Commerce forecasts are in place at least through Friday and Saturday, when a week cold front is expected to bring some showers — but only slightly cooler temperatures.

Forecast temps edge up into the mid-80s in East-Central Florida. (Image credit: NWS-Melbourne)

If anything, Florida temps are expected to rise out of the Goldilocks category as mid-week approaches, with highs inland hitting the upper 80s in South Florida.

LONG-RANGE: The climate forecast model CFS indicates mostly above normal temperatures in Florida through the rest of February, followed a cool-ish start to March.

Enjoy whatever cold fronts we can squeeze out for the rest of the season, because heat and humidity build in fast once spring arrives. 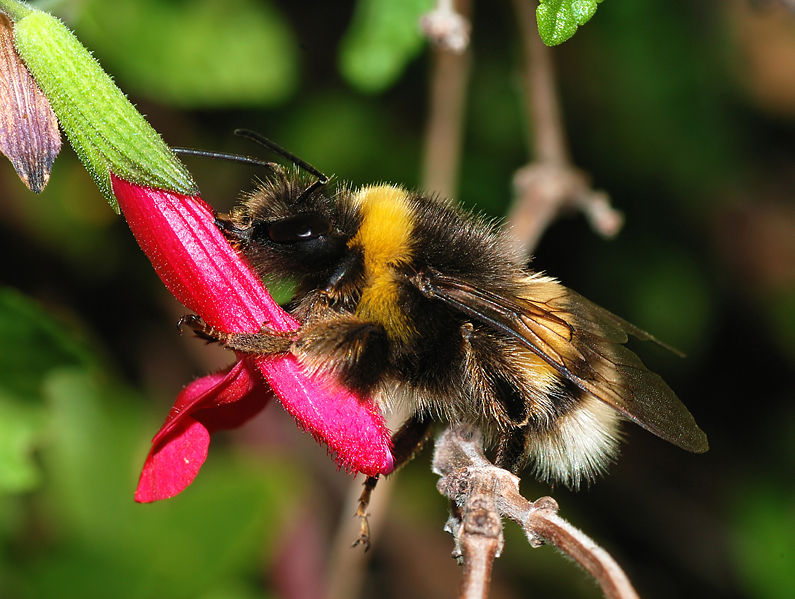 MORE CLIMATE CHANGE BUZZ: A rapidly warming world has bumblebees on a fast track to extinction, a new study says. That’s a big problem because bumblebees are the world’s best pollinators.

“We have now entered the world’s sixth mass extinction event, the biggest and most rapid global biodiversity crisis since a meteor ended the age of the dinosaurs,” says Peter Soroye, a PhD student in the Department of Biology at the University of Ottawa in Canada.

Soroye and colleagues developed a new type of climate analysis that takes into account how different species tolerate temperature change, drought and heatwaves. They then applied this technique to 66 bumble bee species across North America and Europe, collected over a 115-year period from 1900-2015.

Using this new “climate chaos” technique, the researchers showed how bumblebee populations have changed by comparing where bees are now to where they were historically.

“We found that populations were disappearing in areas where the temperatures had gotten hotter,” Soroye says. “Using our new measurement of climate change, we were able to predict changes both for individual species and for whole communities of bumble bees with a surprisingly high accuracy.”

They said the bees are disappearing at rates “consistent with a mass extinction.”

“If declines continue at this pace, many of these species could vanish forever within a few decades,” Soroye said.

Bumblebees, although they do not produce honey, are the most effective pollinators for tomatoes, squash and berries, so the loss would be significant.

GET OUT THE BEACH CHAIRS: The announcement last week that Earth had its warmest January on record was followed up with another milestone: Antarctica recorded its warmest temperature ever, a balmy 65 degrees at Esperanza Base along Antarctica’s Trinity Peninsula.

The peninsula is heating up quicker than most other places on the planet.

“In just the past 50 years, temperatures have surged a staggering 5 degrees in response to Earth’s swiftly warming climate,” the Capital Weather Gang at The Washington Post reported Friday.

“Around 87 percent of glaciers along the peninsula’s west coast have retreated in that time, the majority doing so at an accelerated pace since 2008.”