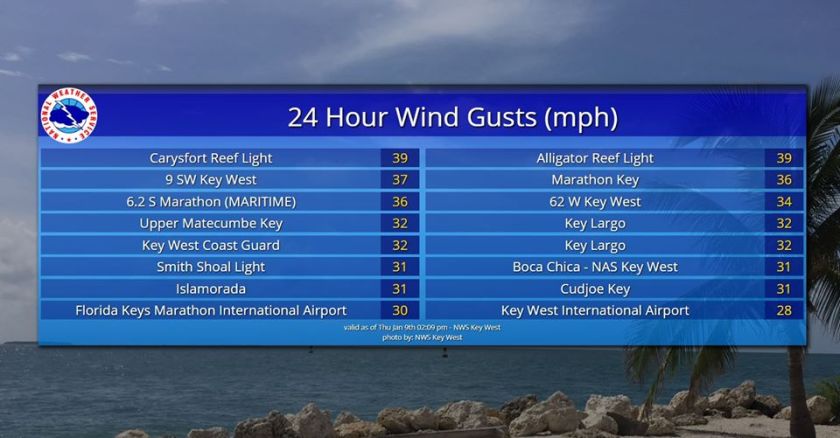 Winds were gusting up to 39 mph in the Keys on Thursday due to a tight pressure gradient between high pressure to the north and low pressure to the south. Windy weather was in the forecast through Sunday. (Image credit: NWS-Key West)

MORE ON 2019: Annual average temperatures in East-Central Florida for each year since 2015 have been among the top 10 warmest on record for cities from Daytona Beach to Fort Pierce, the National Weather Service in Melbourne said in a report posted Thursday.

“Extreme warmth [occurred] at times, especially into February and the fall season,” meteorologists said. “Most notably, Vero Beach had their warmest September and October on record. It was also the warmest October on record for Daytona Beach and Orlando.”

Check out the full report for complete details.

PONDERING THE PACIFIC: ENSO neutral conditions are expected in the Tropical Pacific through spring and perhaps through summer as well, NOAA’s Climate Prediction Center said in an analysis released Thursday.

FLORIDA DROUGHT UPDATE: Drought conditions faded throughout Florida after a wet December, the U.S. Drought Monitor said Thursday. Moderate Drought lingered, though, in the Central Panhandle and Moderate Drought was reduced to Abnormally Dry conditions in the Everglades.

Freelance writer and editor View all posts by jnelander